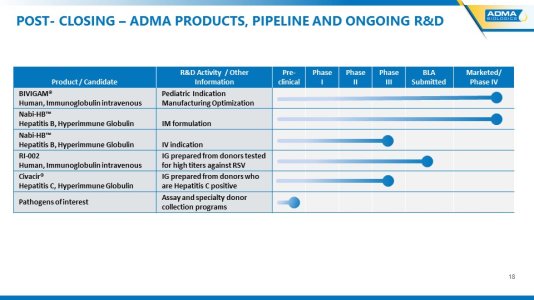 “As part of our compliance enhancement upgrades to our Boca Raton, FL facility, we optimized the intravenous immunoglobulin (“IVIG”) manufacturing process for BIVIGAM®. We continue to work with the FDA to finalize our BIVIGAM Prior Approval Supplement (“PAS”) for drug substance, with the goal of reintroducing BIVIGAM® to the market this year. We are also working closely with the FDA on the pending application for RI-002’s initial approval, and the FDA action date is scheduled for April 2, 2019,” continued Mr. Grossman.

“Other notable accomplishments include: retiring approximately 8.6 million shares of our non-voting common stock from Biotest Pharmaceuticals Corporation, receiving FDA approval of our plasma collection center in Kennesaw, GA, obtaining FDA approval for the BIVIGAM® drug product PAS and completing a debt refinancing of up to $72.5 million with Perceptive Advisors.”

Mr. Grossman concluded, “We look forward to continuing to work with the FDA during 2019 as we seek FDA approval for the pending applications for both RI-002 and BIVIGAM®. FDA approval for RI-002 and BIVIGAM®, if received, along with Nabi-HB®, our presently commercially available hyperimmune globulin, would give us three commercial immune globulin products and would make ADMA one of the few globally recognized plasma manufacturers offering a portfolio of novel immune globulin products.”

Completed a debt refinancing of up to $72.5 million with Perceptive Advisors

Continue to produce, release and market commercial product for Nabi-HB® in the U.S.

ADMA reported total revenues of $17.0 million for the year ended December 31, 2018, as compared to $22.8 million for the year ended December 31, 2017, representing a decrease of $5.8 million. The decrease in revenues is primarily due to $7.0 million of non-recurring revenue generated in 2017 that was related to an amendment to our contract manufacturing agreement and a decrease in the sale of normal source plasma of $1.6 million in 2018 due to increased competition from other plasma donation centers which have opened in close proximity to the plasma collection centers we transferred to Biotest on January 1, 2019, partially offset by an increase in Nabi-HB revenues of $2.8 million.