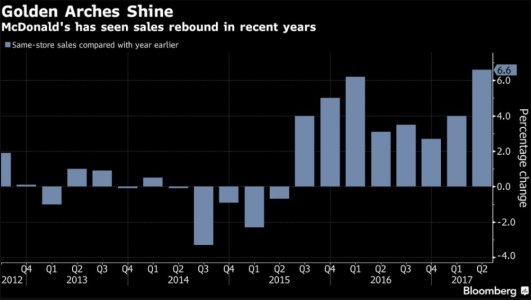 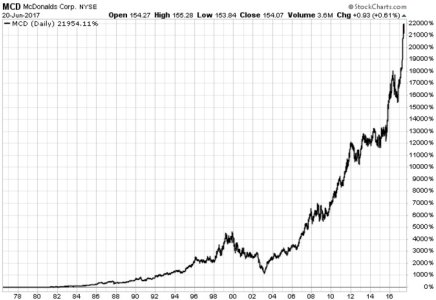 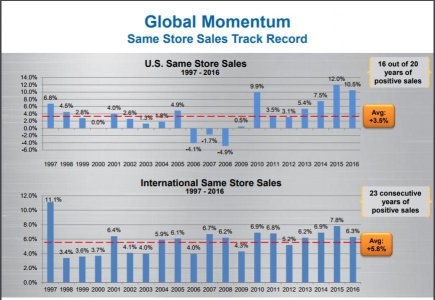 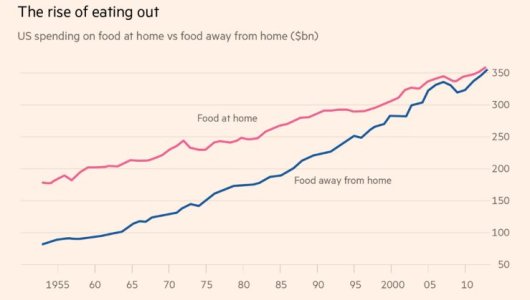 
CHANOS: YEAH. SO, WE'RE SHORT ACTUALLY A NUMBER OF THE FAST FOOD OPERATORS. WE'RE NOT SHORT McDONALDS AND THAT'S ONE OF THE REASONS, BUT ONE OF THE THINGS THAT'S SORT OF INTRIGUING TO US OVER THE PAST TWO YEARS IS HOW WALL STREET HAS EMBRACED THE FRANCHISE MODEL. SO IF YOU LOOK AT THE BUFFALO WILD WINGS DEAL, THERE ARE A NUMBER OF ANNOUNCED DEALS. THE WHOLE IDEA, EVERYTHING THAT RESTAURANT BRANDS, QSR DOES, FOR EXAMPLE, THEY'RE TAKING RESTAURANTS BY IN LARGE THAT WERE OWNED AND THEY'RE SELLING THEM TO FRANCHISEES AND THE FRANCHISER.

CHANOS: THE ASSET LIGHT MODEL. AND SO EVERYBODY GIVES A HIGHER MULTIPLE TO THE ASSET LIGHT MODEL. THE PROBLEM IS AT THE END OF THE DAY THE BOX HAS TO WORK. AND ONE OF THE EASIEST WAYS TO LOOK AT THAT, IF YOU LOOK AT QSR, WHICH IS A DARLING STOCK, HIGH MULTIPLE, BURGER KING, POPEYES, TIM HORTONS— THEIR LARGEST NORTH AMERICAN FRANCHISEE IS PUBLIC, COMPANY CALLED CAROLS, SIMPLE TASTE. AND IT'S FASCINATING TO LOOK AT THE FINANCIALS OF QSR AND COMPARE THEM TO THEIR FRANCHISEE. THE FRANCHISEE IS STRUGGLING. THE NUMBERS ARE THERE FOR EVERYBODY TO SEE. SALES ARE GROWING A LITTLE BIT BUT PROFITABILITY IS IMPLODING BECAUSE THEY'RE BEING LOADED WITH MORE AND MORE COSTS. AND THIS IS WHAT SOME OTHER FRANCHISEES IN THAT PARTICULAR COMPANY ARE ALLEGING AT TIM HORTONS. LAWSUITS.

EVANS: AND WHERE ARE THOSE COMING FROM, LABOR COSTS, ARE THOSE --?

CHANOS: WELL, THEY'RE HIKING ROYALTY RATES, THEY'RE PUTTING RESTRICTIONS ON THE FRANCHISEES, YOU KNOW, ALL SORTS OF DIFFERENT WAYS TO DO IT. BECAUSE AT THE END OF THE DAY, A FRANCHISE CAN ONLY GROW IN A FEW WAYS. THEY CAN INCREASE THE NUMBER OF UNITS IN THE SYSTEM, THEY CAN – SAME-STORE SALES CAN INCREASE IN THE SYSTEM, OR THEY CAN RAISE THE ROYALTY RATE. THOSE ARE THE THREE LEVERS, I SUPPOSE THEY CAN SELL THEM MORE THINGS OUT OF THE COMMISSARY == MAYBE FOUR LEVERS. SP EACH OF THOSE WITH THE EXCEPTION OF SAME-STORE SALES PROBABLY ULTIMATELY HURTS THE INDIVIDUAL BOX, BECAUSE YOU PUT MORE UNITS OUT THERE, WELL, IT HURTS SAME-STORE SALES.

CHANOS: YOU RAISE ROYALTY RATES, IT HURTS THE FRANCHISEE. SO, IT'S A LITTLE BIT OF THIS ZERO-SUM GAME AND YET WALL STREET GIVES HIGHER AND HIGHER MULTIPLES TO THE FRANCHISORS. NOBODY WANTS TO OWN THE RESTAURANTS ANYMORE. THAT'S KIND OF A PROBLEM AND A PARADOX, AND I SUSPECT WE'RE GOING TO SEE MORE AND MORE DISTRESS IN THE FRANCHISE SYSTEMS AS MORE AND MORE RESTAURANTS SORT OF STRUGGLE BUT YET THE PARENTS ARE DOING WELL.

EVANS: SO WOULD YOU BE SHORT, THEN, THOSE NAMES THAT YOU MENTIONED?

CHANOS: I'D BE SHORT PRETTY MUCH ANYBODY IN THE QUICK SERVICE INDUSTRY BESIDES McDONALDS. McDONALDS STILL CALLS THE TUNE. THEY'RE THE 6 BILLION POUND GORILLA. SO TO SPEAK THEY JUST WENT TO A NEW VALUE MENU A FEW WEEKS AGO, WHICH ALWAYS IMPACTS THE INDUSTRY. IT'S A DOG FIGHT. IT'S A DOG FIGHT DOMESTICALLY. WE AREN'T GROWING. I MEAN, WE'RE PHYSICALLY GROWING PROBABLY, BUT WE'RE NOT GROWING POPULATION THAT FAST. YET UNITS ARE STILL GROWING. EVERYBODY WANTS TO GROW UNITS.

EVANS: WHAT ABOUT FAST CASUAL THEN, WHICH HAS A LITTLE BIT DIFFERENT MODEL?

CHANOS: YEAH, BUT I THINK, YOU KNOW, WHEN YOU START TO SEE THE SHAKE SHACKS OF THE WORLD, THEY BEGIN TO BLUR, RIGHT. PEOPLE, SO ONCE THEY GO TO SHAKE SHACK, MAYBE I'M NOT GOING TO GO TO McDONALDS AS MUCH ANYMORE. SO YOU BEGIN TO BLUR SOME OF THE LINES. PARTICULARLY THE BURGER SPACE. 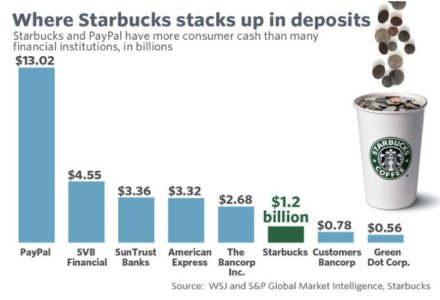 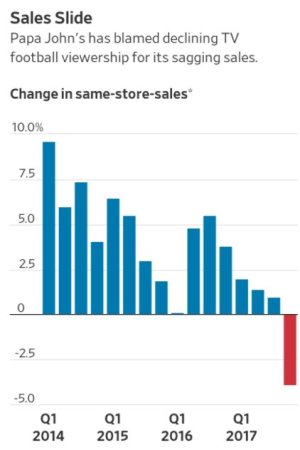 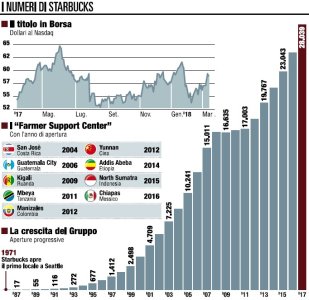 I would like to make one last comment on this one before I guess, you can answer the capital question is in the long-term, we are committed to China and for KFC, we always mention that we're in 1,200 cities but we still have 1,000 cities in China that we don't have a KFC.
For Pizza Hut, right now, we are only in 500 cities in China. So that means there are 1,700 cities in China that does not have Pizza Hut yet. So in the short term, obviously, we see the bumpiness. But in the long term, we believe the opportunity, the fundamentals are still very good.For KFC, we are already in 1,200 cities and it covers a range of top-tier to lower-tier cities. And the dynamic in the top-tier versus lower-tier cities is quite different.

So if I could use the way to describe it, it's a one country, two strategies. So in the top-tier cities, our focus has been driving same-store sales. We are opening stores but even for Q3, we can see we drive very healthy same-store sales with the offers, the value, et cetera.And for the lower-tier cities, we are very aggressive in opening new stores because there's a lot of white space still available in both the lower tier cities we are in and in the cities where we don't even have one single KFC store. And again, we have seen the result of lower-tier cities right now is giving us very nice system sales growth.
Even though the new store that we opened in imply sales transfer from the existing store to new store, but net-net, the system sales growth is what we want to see in lower-tier cities. So holistically, we believe that we are doing the right thing to drive both same-store sales in top-tier cities and system sales in lower-tier cities.
And you can see in KFC, we have opened more stores for the first nine months than the entire year last year, and that is driven by the economics. When we open a store, we evaluate each store what - on each store basis, whether it makes profit, whether it satisfies a criteria of payback. And we are very happy with the two years - less than two years payback when we open a new store.
So as long as we can open stores, satisfy less than two year payback, we are committed to the new store opening. Now, Pizza Hut, Pizza Hut obviously, we are going through a transition and we are adjusting our business model. As you can see, we are still opening stores in Pizza Hut despite the challenges in the revitalization because it's still the right thing to do.
With that said, we have adjusted our new store model. So what are the characteristics of the new stores that we have opened? First, they are more targeted toward certain customer behaviors, customer needs, locations and they are more delivery-friendly. Secondly, overall, the new stores of Pizza Hut are smaller in the - of the old store on average, the size is about 400 square meters.
The new store, on average, about 300 square meters, so it's a 25% reduction. And we believe this is a much better model to support the growth of both dine-in and delivery business going forward, with much better cost structure from CapEx to upgrading COGS, et cetera. So that's for the unit growth. In terms of coffee, my thoughts are as follows.
First, we are very excited about the coffee category. We believe the coffee category has huge growth potential in China in general. And we have been excited about the coffee category since 2015 when we significantly upgraded our coffee offering at KFC.
And in the past three years, we have seen a huge amount of growth right across China in all of our 5,600-plus KFC stores. And this year, we're going to exceed CNY1 billion sales for KFC coffee alone. But also, we also sell coffee in Pizza Hut as well. We will continue to improve our coffee offering at our core brands. At the same time, we are exploring a new standalone concept in COFFii & JOY.