Buffett has stepped up to the tech batter’s box again — according to the Wall Street Journal, he is now the proud owner of an 11% stake in PC Maker HP. Should you follow in Buffett’s wake and buy stock in HP?

Here are four reasons not to:

HP's products lack universal appeal
Customers do not have an addictive need to buy HP's products
HP has no moat
Buffett lacks superior computer industry insight
Buffett’s Investment in HP
Berkshire Hathaway revealed ownership of nearly 121 million shares of HP in securities filings on April 6, according to the Wall Street Journal. After the market had a chance to digest this news, the value of his investment popped 14.75%, or $650 million, from about $4.2 billion to $4.85 billion, according to CNBC.

Buffett — who is now HP’s largest shareholder — is placing a bet on a company with a storied history. In 1939, two Stanford graduates — Dave Hewlett and William Packard started Hewlett-Packard Co. in a Palo Alto garage.

MORE FOR YOU
Stocks This Week: Buy KLA Tencor And Starbucks
Fintech Stocks Continue To Lag The Market. Time To Buy?
What’s Next For BlackBerry Stock After A 4% Move Last Week?
In 2015, then CEO Meg Whitman split the company in two: HP which sells PCs and other products to consumers and small businesses and Hewlett Packard Enterprise — which focuses on business customers.


Why did Buffett bet on HP? He offered a clue in his February 2022 shareholder letter, writing, “Whatever our form of ownership, our goal is to have meaningful investments in businesses with both durable economic advantages and a first-class CEO. We own stocks based upon our expectations about their long-term business performance and not because we view them as vehicles for timely market moves.”

Here’s How Much Major Energy Companies Are Losing By Exiting Russia
HP’s Performance and Prospects
Since HP was split off from HPE in 2015, it has migrated into enterprise markets. It provides “personal computing and other access devices, imaging and printing products, and related technologies, solutions and services to individual consumers, small- and medium-sized businesses (SMBs) and large enterprises, including customers in the government, health and education sectors,” according to CNBC.

HP — whose stock closed at an all-time high on April 7 — raised its 2022 profit outlook in late February after reporting strong sales of computers to businesses in the first quarter of its fiscal year (which ends in February) but warned that Russia’s invasion of Ukraine would dampen growth in the current quarter, noted the Journal.

HP’s revenues grew modestly — although it beat earnings and revenue targets. Revenue increased 9% to $17 billion — $500 million more than analyst expectations. Earnings per share of $1.10 were eight cents above the consensus, according to SiliconAngle.

HP offered earnings forecasts for the current quarter and 2022 ahead of Wall Street forecasts. Specifically, it expects EPS in a range — the midpoint of which is $1.05 — which is three cents above the consensus. For fiscal 2022, the midpoint of the range of HP’s forecast is $4.28 — three cents ahead of the Street forecast, noted SiliconAngle — but a whopping 20% below its 2021 EPS of $5.33.

HP still derives most of its revenue and growth from selling desktop computers and laptops which were up 15% to $12.2 billion — representing 72% of its total sales for the year.

HP is bullish about its performance and prospects. As CEO Enrique Lores said, “Our Q1 performance was particularly strong across our key growth areas that collectively grew double digits including gaming, peripherals, workforce solutions, consumer subscriptions, and industrial graphics and 3D. Our performance reflects progress against our strategy to build a stronger HP.”

In March, HP acquired Poly, a maker of workplace communications products, for $1.7 billion based on its expectation that demand for hybrid work will continue. Lores expects the new “hybrid world” where people work and play will likely remain “for the foreseeable future,” according to MarketWatch.

Indeed, if there is any possible appeal of HP’s business it is in that hybrid future. HP has “aggressive growth targets for Poly based on the belief that its supply-chain muscle can clear Poly’s growing backlog of orders. And HP is likely eyeing other potential plays in hardware peripherals—all to grow its exposure to a hybrid workforce splitting its time between home and the office,” noted the Journal.

Sadly, it looks to me as though HP’s high stock price does not foretell faster growth ahead. While demand for laptops and desktops grew rapidly during the pandemic, market analysts foresee that PC shipment growth will slow down considerably.

Will HP achieve its aggressive growth targets for hybrid or will it fall short? There is little basis on which to know and I am not sure why Buffett is willing to bet over $4 billion that it will.

How Buffett Makes Investment Decisions
Let’s take a closer look at how Buffett makes investment decisions to assess whether HP fits the bill. As I wrote in November 2015, Buffett's partner, Charlie Munger, has done a nice job of summarizing how Buffett thinks about investments.

Munger created a character named Mr. Glotz — modeled after Buffett. According to a 1996 speech by Munger, Mr. Glotz is a hypothetical investor who is looking for opportunities to turn $2 million into $2 trillion over the next 150 years — at a compound annual growth rate of 10%.

Munger’s talk revealed that he believed Coke was such a company. Munger suggested that Mr. Glotz would pick such companies by listening for 15 minutes to the CEO’s pitch.

Between Mr. Glotz and a 1998 interview with Buffett, here are three tests that a company must satisfy to get an investment from Buffett:

Has it built an indomitable global moat thanks to a strong trademark and a ”universal appeal”?
Has it harnessed “powerful elemental forces” that compel consumers to buy almost addictively?
Could Buffett understand the business?
HP's Products Lack Universal Appeal
I concede that people buy HP products. However, HP is not the market leader in desktops and PCs — where it trails Lenovo. More specifically, according to IDC, in the final quarter of 2021, Lenovo’s worldwide PC market share was 23.4%, HP (20.1%), Dell (18.6%) and Apple (8.2%).

This tells me that HP is one of many significant participants in the desktop and PC industry — its appeal is not universal.

There Is No Addictive Need for Customers to Buy HP's Products
Unlike Coke or Apple, people do not have an addictive need to buy HP products. In general, there is nothing uniquely compelling about HP’s products.

People can buy a desktop or laptop and when it runs out of steam they can buy one from any number of vendors — Dell, Lenovo, HP, Apple, and others — and it will work pretty well.

HP Has no Moat
In my view, a company has a moat if it leads its industry and competitors are unable to erode that lead. Since HP does not enjoy market leadership and there are many rivals with comparable product features, according to the 2021 ACSI analysis, I agree with Morningstar which calls it “No-moat HP.”

Buffett Lacks Superior Computer Industry Insight
I don’t know what Buffett knows about the computer industry. However, he was famous in the 1990s for declining to invest in his pal, Bill Gates’ Microsoft because he could not predict where the industry would be in a decade.

Nevertheless, Buffett has made investments in some of the biggest names in the industry — including IBM, Oracle, and Apple. His “long-term position in IBM and a short-term fling with Oracle” did not pan out according to the Journal.

But his bet in Apple — which began in 2016 — “has paid off handsomely. The iPhone maker’s market value has since soared more than fivefold to just below $3 trillion. Apple is now Berkshire’s single largest investment in a company it doesn’t control by market value,” noted the Journal.

I admire Buffett’s success with his Apple investment and based on my conversations with students about Apple over the last decade or so, I am convinced that Apple exemplifies the qualities of universal appeal, addictiveness, and a high moat that HP sorely lacks.

Either Buffett has superior insight into how HP will create a business for hybrid workers with these characteristics or there is some other reason he bought so much of its stock.

As far as I can tell, that something else is that HP stock is cheap on a price-earnings basis. As the Journal reported, its 8.0x ratio of price to expected earnings for the next 12 months is “modest compared to the industry.”

Unless HP grows faster than investors expect and it raises its guidance, I agree with Morningstar — whose price target is $29 — that the stock is over-valued.

Due considerazioni in merito all' acquisto della partecipazione in HP. 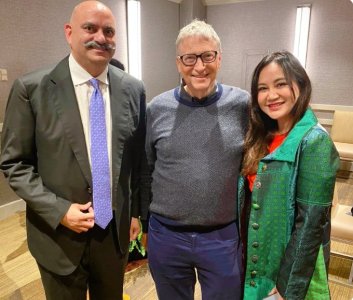 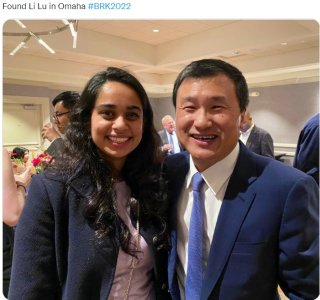 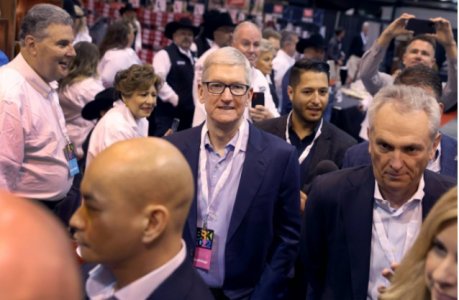 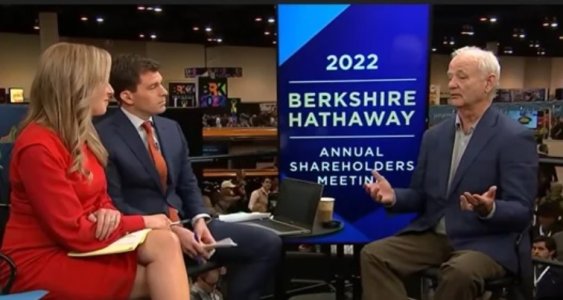 Omaha, Nebraska-based Berkshire said it sold nearly all of an $8.3 billion stake in Verizon Communications Inc (VZ.N) that it had amassed in late 2020.

Berkshire also finally exited Wells Fargo & Co (WFC.N), a 33-year-old investment that Buffett soured on after finding it too slow to address revelations that employees had mistreated customers, including by opening unwanted accounts.

Buffett's company ended March with $106.3 billion of cash and equivalents, down from a near-record $146.7 billion three months earlier, largely reflecting the new investments.

Citigroup, where Berkshire invested nearly $3 billion, has embarked on a multiyear plan to boost performance and a share price that in recent years has lagged larger rivals JPMorgan Chase & Co and Bank of America Corp (BAC.N), the latter a major Berkshire investment.(news)

Some investors have described Markel as a small-scale version of Berkshire, and Buffett in March committed $11.6 billion to buy another insurance holding company fitting that description, Alleghany Corp. (Y.N) (news)

Monday's filing does not say which investments were made by Buffett and his portfolio managers Todd Combs and Ted Weschler.

Most large Berkshire investments are Buffett's. Stock prices often rise after Berkshire reveals new stakes because investors view the investments as a stamp of approval.

At Berkshire's annual meeting on April 30, Buffett said investors were too focused on flashy stocks, causing markets at times to resemble a casino, allowing him to focus on stocks that Berkshire understands and which add value. (news)

Analysts have also viewed Chevron and Occidental as a way for Berkshire to benefit from rising oil prices following Russia's invasion of Ukraine.

"I wish the rest of the world worked as well as our big oil companies," Berkshire Vice Chairman Charlie Munger said at the annual meeting.